Just south of Sydney, set amongst 100 acres of beautiful countryside overlooking the picturesque Kangaroo Valley, lies Wallaby Hill Farm, one of Australia’s premier equestrian centres. The farm itself which in a former life was a potato farm and later a cattle farm is nestled between two national parks. However, it has been transformed into an established equine property adding a valuable equestrian event to the calendar known as the OTTO sport CCI 3* three day event. This weekend (December 1st-3rd) will see some of Australia’s best equestrians as well as the up and coming young guns take on the Wallaby Hill Farms’ 3 Day Event. The acquisition of neighbouring land has seen the event grow from a CNC2* event to the CCI 3* event of this weekend. With the ever-growing popularity of the event and peoples love of the farm itself, the list of competitors is quite extensive, including Equi-Ice team member Jade Findlay.

Jade is an accomplished horse woman having spent various periods of her riding career under the tutillage of some of the UK and Australia’s best riders. Most notably, Christopher and Jean Bartle (both Olympic dressage riders), Stuart and Karen Tinney and most recently Chris Burton.

Jade has forged a successful riding career in her own right with the most notable horse being Holstein Park Leilani who went on to compete under the guidance of Chris Burton at both the World Equestrian Games and the Olympics. Not only is Jade a tenacious and considerate rider she places great emphasis on the welfare of her horses which is why she has employed the use of the Equi-Ice cooling system to her training and competition regimen. Jade has utilised the Equi-Ice system to great effect on one of her mares who would have difficulty reducing her heart rate and core temperature post cross -country phase. By applying Equi-Ice over the thoracolumbar spine and pelvic region Jade can not believe the difference in the recovery of her mare.

With temperatures set to rise above 28 degrees with up to 80% humidity, it’s going to be a day for sunblock, hats and finding any available piece of shade to watch the show jumping and cross-country phases. Most importantly, representatives from Equi-Ice will be on site to demonstrate the importance of effective cooling and recovery strategies for your equine athlete. 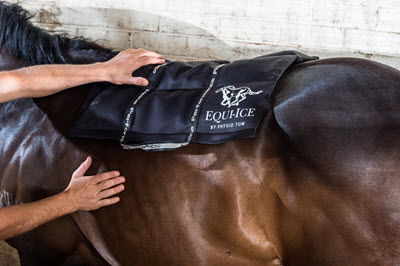 Make Equi-Ice part of your tack